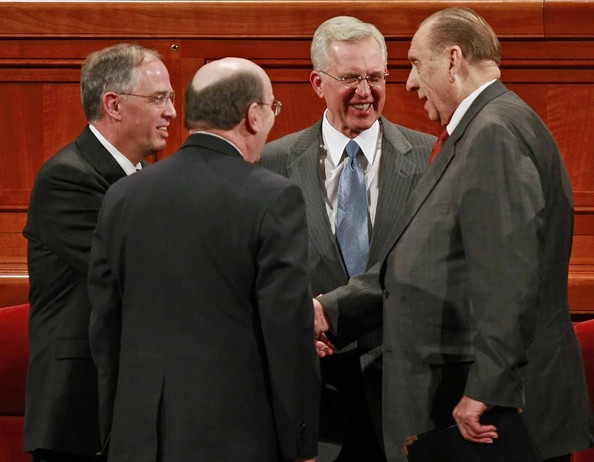 Last week the LDS church announced it will no longer punish people for supporting gay marriage.  This, despite the brethren saying that such a practice goes against church doctrine and constitutes a crime against nature.  Of course, the church is suggesting that they are merely reaffirming their long held stance of allowing members to publicly oppose church doctrines.

“An LDS apostle reaffirmed recently that Mormons who support gay marriage are not in danger of losing their temple privileges or church memberships — even though the Utah-based faith opposes the practice.  In an interview Friday (March 13) with KUTV in Salt Lake City, Elder D. Todd Christofferson said that individuals in the 15 million-member Church of Jesus Christ of Latter-day Saints would be in trouble only for “supporting organizations that promote opposition or positions in opposition to the church’s.”  (Salt Lake Tribune, Peggy Stack)

So apparently a church member can now safely go online (or has always been able to) and while identifying as Mormon can state his or her belief in any practice that goes against any and all doctrines of the gospel, as long as they do not support an organization that feels the same way they do.

“Our approach in all of this, as (Mormon founder) Joseph Smith said, is persuasion. You can’t use the priesthood and the authority of the church to dictate. You can’t compel, you can’t coerce. It has to be persuasion, gentleness and love unfeigned, as the words in the scripture.”

Any person openly “opposing” the church’s teachings, no matter who the individual is, the church will not compel him, coerce him, nor take away his recommend or his membership.

In theory this means one can openly argue that the church should practice polygamy.  He can take to the airwaves, write books, and make persuasive and intelligent arguments.  He can share his feelings in church and everywhere he goes.  He can blog about his love of the doctrine and openly tweet of its carnal and health benefits.

Without any retaliation or fear of discipline, one can now argue for re-instituting the ban on blacks receiving the Priesthood.

I suppose one can now argue openly in favor of abortion, murder, Jihad, pornography, slavery, fornication and stealing, all as a Mormon in good standing.

When a person shares these views on say… CNN, and the world becomes outraged, the church will stand by him or her and will tell the world that it upholds this member’s right to be in favor of such issues.  We will not condemn such speech as the church recently has done in its essays on priesthood.  But rather we will lovingly disagree and refer to such scoundrels with love unfeigned.

“a total desertion of or departure from one’s religion, principles, party, cause, etc.”

It is interesting to me that the church does not seem to want to call at least those in favor of gay marriage, “apostates,” despite their clear departure from what we have been told are the true doctrines and principles of our religion.

Is this the same generous standard being applied to those:

1)  who are wanting and openly asking the church to be more transparent?

2)  who openly disagree about the way the church is spending tithing?

3)  who think it’s a bad idea to run the church so much like a corporation?

4)  who think that the words “prophet, seer, and revelator” should not be used casually and only apply to those who have done as the scriptures teach — i.e. stood in the presence of God and who have been ordained by Him?

5)  who believe that men are fallible and that even the very elect can be deceived by leaders in the church and the precepts of men?

Elder Christofferson does make one disclaimer:

“We have individual members in the church with a variety of different opinions, beliefs and positions on these issues and other issues,” Christofferson said. ” … In our view, it doesn’t really become a problem unless someone is out attacking the church and its leaders — if that’s a deliberate and persistent effort and trying to get others to follow them, trying to draw others away, trying to pull people, if you will, out of the church or away from its teachings and doctrines.”

So, in other words, “We want church members to think they are allowed to say whatever they want so that the world will think we are just so amazingly open minded, BUT the second their comments question the church’s leaders or when their arguments begin to actually persuade people, then all the gentleness and kindness and persuasion will go out the window.”

In LDS Mormonism there is really only one doctrine left. Everything else is subordinate and changeable. But this single demand is paramount. If you disbelieve this position, then LDS Mormonism has no place for you. The doctrine:

We follow a man whom we call a prophet.

If you disbelieve this, and think you ought to follow Christ first, and the church’s “prophet” is secondary, then you are insubordinate and a threat. Believing Christ comes first opens the possibility that Christ could tell you the “prophet” is mistaken. That is intolerable.