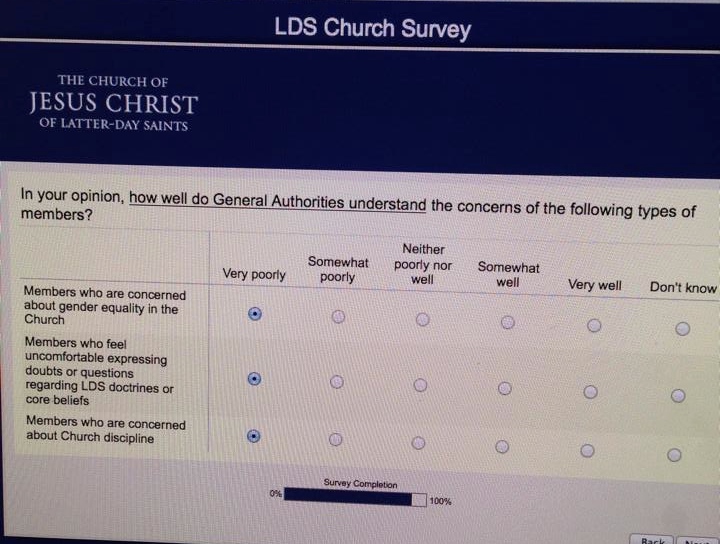 I’m intrigued that the church relies so heavily on surveys.  I first became aware of this while serving as a bishop.  I find it ironic that the surveys are usually anonymous.  I assume this is to both ensure the protection and the privacy of the individuals participating as well as to encourage a completely honest response.

I say “ironic” only because there have been some who have criticized me for providing my feedback to the church on this blog, anonymously.

Some have been very critical of my anonymity, calling it cowardice, despite my best efforts to be helpful and honest and although I have no desire to hurt anyone’s faith in Christ or in the Gospel and its restoration through the prophet Joseph Smith.  Meanwhile, “ironically,” the church has encouraged such feedback in its surveys.

My feedback has been considered by some, even in my own family, to be apostate.  Yet, the church asks questions as one can see above welcoming very critical feedback of the leadership of the church.

“How well do General Authorities understand the concerns of the following types of members?”

Is this not a solicitation to provide honest feedback?  Furthermore the church provides the very wording to respond that the Brethren are doing “VERY POORLY” if applicable.

How honest is it for the Brethren to solicit such information in surveys, WANTING HONEST FEEDBACK, if only to excommunicate those who actually provide the same type of honest feedback in a forum such as a blog or book?

It appears the Brethren want to have it both ways:  They want to survey the church and its leaders to see how we really feel about hot topic issues such as the Temple Endowment, garments, gays, women and the priesthood, apostasy, etc., BUT they then want to be able to cater to or punish the “respondents” depending on whether or not they represent the majority or fall in line with their own views.

If 750/1000 members, for example, feel like the Temple Endowment needs to be changed, the Brethren will be grateful for the feedback and will appear spiritually informed to 75% of the church when they make the changes.

But, if you write a letter to the Brethren, with your real name on it, saying you are saddened by the changes to the ordinances, you will be dealt with by Priesthood leaders for having the audacity to question their decisions.  What happened to wanting honest feedback?

When 50/1000 members want to see more transparency from the church, the Brethren will be grateful for the data that supports their continuation of secrecy and will seek to find and punish those who openly provide their feedback in opposition to their position and to the position of the alleged majority.  Of course, this is not a question you will likely see in a survey.  As Damon Smith points out, the church does not often ask questions it does not want an honest answer to.

One thing is certain though — speaking out about one’s concerns, when you are not on the right side of the survey responses, is equated to Apostasy.

With at least one exception — It does help your cause if you pay a lot of tithing and/or are a famous and well-liked Mormon.

I was tempted recently to do a short post on John Dehlin.  I was going to entitle the post:

“What’s the Difference Between John Dehlin and Steve Young?”

The answer?  About 40 Million Dollars, an ESPN Contract, and a Few Superbowl Rings.

Most people know that Dehlin was excommunicated mostly because he supports gay marriage.  Young, a high dollar account for the church, actually gave $50,000 to oppose Prop 8 in California in 2008.  He also does firesides with his wife Barbara where they talk of soliciting members to oppose Prop 8 during church meetings.  Seems like a double standard to me.

Nonetheless, I take heart to know there is a precedent for providing honest and anonymous feedback.  I’m grateful the church says it wants it.  Many bishops and leaders I know DO fear the consequences if they share their true feelings.  So being able to do so anonymously for now, with the church’s encouragement, gives me some hope.