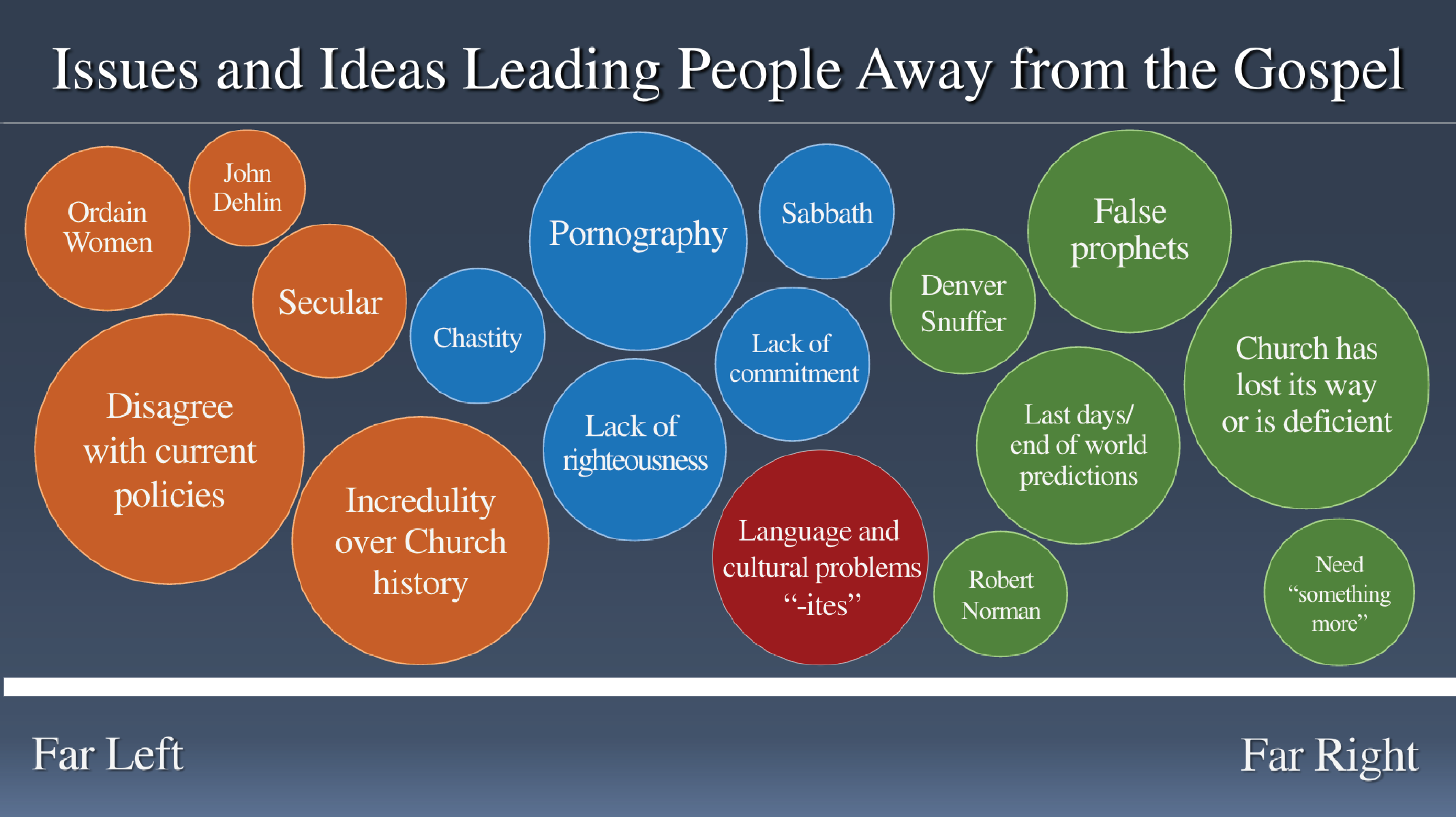 This is an image you’re going to see a lot of in the news and around the bloggernacle.  It’s from a leaked powerpoint presentation (UPDATE – the LDS Church has issued a take down notice to Mormon Leaks) that was given to the 12 Apostles in December of 2015.  It highlights what Church leaders deem as the most important issues or ideas causing Church members to be “lead away from the gospel.”

Might I just say at the outset of this post that I truly respect these men who are sincerely trying to grapple with very difficult issues confronting the Church.  I know many of them. Some are my friends.  I do not envy their positions.  I believe them to be as sincere as I ever was as an active LDS person, or more so.

But might I also suggest that this bubble chart is very much the stuff of the corporate realm.  Where paid data analysts and middle management folks do the research and then present a well-thought out proposal to their VPs and CEOs.  As you know, this is one of my issues I have with the Church.  I feel like the Church operates too much like a business rather than by revelation.

I did find it interesting that this particular page of the powerpoint refers to people “leaving the gospel.”  I can’t speak for others, but I see some of these bubbles on this chart as reasons why people may leave the Church (although not necessarily), but who in many cases as a result of their “issues” may actually find the gospel.

As one example, the chart speaks of “pornography, chastity, and lack of righteousness” as to why many people are leaving. And yet we learn in scripture that the Lord gives us weakness that we may come unto Him:

I can personally testify that God gives us weakness (one might say the tendencies of the natural man) — that we may be humble — that we may turn to Him.  Or you could say, turn towards the Gospel.

Perhaps the Church is too worried about people’s weaknesses and should see them more as God’s hand in our lives. This reminds me too much of the obsession we have as Mormons to be a part of the Not Even Once Club.  It’s almost as if the Church would prefer no one ever make a mistake rather “learn by our own experiences to choose good over evil.” 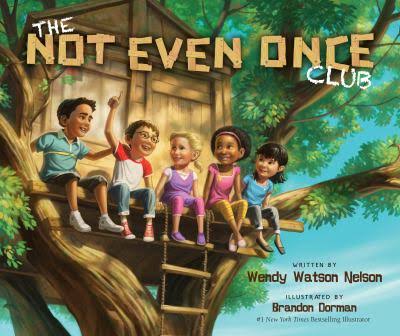 I love the verse in the D&C that shows how our Lord uses our weaknesses and trials to His advantage:

And after their temptations, and much tribulation, behold, I, the Lord, will feel after them, and if they harden not their hearts, and stiffen not their necks against me, they shall be converted, and I will heal them (D&C 112:13).

It is usually when I feel most broken (often from my sins and weaknesses) that I experience the Lord feeling after me.  And of course the best part, it is most often then that I become more converted to Him and more healed by Him.

The Church seems to be more concerned with Church activity as a way to measure righteousness.  Some of my most spiritual experiences with ward members have been in hospitals, prisons, at grave sides and in the homes of “inactives,” where in many cases sin or other tribulations have brought someone to their knees.

I spoke to a family member recently for example who is inactive.  Her bishop asked her the other day if she has been praying.  His insinuation was that she was not, because after all, she is “inactive.”  She replied in disbelief and in tears, “I have never prayed so hard in my life for answers.  I have never cried so hard to God.”  She then added that she had recently and for the first time in her life, screamed at God to not let a person she loved, die.  I asked her if it helped.  She explained that although the person did die, something powerful had taken place in her heart in the process of yelling at God.  There was a new trust developed.  A new understanding.  New healing despite the heartache.  All this from someone who has “left” the gospel according to the bubble chart.

Perhaps a better title for this powerpoint page might be “Issues and Ideas Leading People Away From The Church.”  Or “Leading People To The Not Paying Tithing Category.”  I think it would be a more accurate title based on what I think is their goal — to keep people active in coming to Church.

I’d like to spend a minute on what I think is the most important and interesting bubble on the leaked powerpoint:  Denver Snuffer.

Denver is unique on this chart.  He claims to have seen the Lord.  Other people on the chart may be interesting, but in the case of John Dehlin, my understanding is he’s more progressive and would like the Church to change or adapt to more popular and modern positions.

I personally like John Dehlin.  I think he does a great job helping people tell their stories.  He encourages and embraces dialogue.  While I don’t always align with his ideology, I generally find him interesting, intelligent, and compassionate.

But interestingly, Denver seems to want to lead people to the Gospel.  He makes the case that by focusing on the message of the Book of Mormon, all can have and should try to have the same experience he has had.  In fact, Denver, more than anyone else, defends the Restoration and Joseph Smith and the Book of Mormon and the Book of Abraham and the Lectures on Faith etc.

I personally always struggled defending the Church narrative when it came to issues such as Polygamy, Blacks and the Priesthood, and Mountain Meadows.  I made awful excuses that justified awful things because I believed the Church version of its own history.

But Denver HELPS the Church enormously.  He makes a great case for example that Joseph never had sexual relations with Fanny Alger (14 years old) or with anyone, save Emma. One would think that IF this was true, the Church would want to exonerate Joseph from all the awful accusations of pedophilia, polygamy, fornication, and adultery.  Can you imagine how many people would be relieved and overjoyed — who perhaps would “Know brother Joseph again” if Snuffer is right?

Snuffer also makes a great case that blacks should have never had priesthood withheld from them.  At least not the priesthood the Church has and gives.  Can you imagine how much easier it would be IF the LDS Church had not discriminated against Blacks up until 1978?  Joseph was campaigning to free the slaves in the 1800s! and was giving them priesthood. That all stopped with Brigham Young, the self-professed Yankee Guesser.

Denver Snuffer also offers a very compelling reason why the LDS Church is still under condemnation, culminating with the deaths of Joseph and Hyrum at Carthage, fulfilling the promise from the Lord in D&C 124 and reflecting the idea of Moses being taken from Israel as is depicted in D&C 84.  Joseph is described by Nephi to be like unto Moses is he not?  (2 Nephi 3:9).  Maybe Joseph was taken because we, like Israel, wanted something less than the Higher Priesthood and the Fulness of His Glory?  This sure makes sense to me.

Everything I have read from Snuffer suggests to my mind a return to what the Lord was trying to restore through the prophet, seer, and revelator Joseph Smith.

Admittedly the Church has a very difficult path.  If it exonerates Joseph from polygamy, it throws Brigham and ALL prophets and Church leaders up to the present under the bus. Wilford Woodruff included, who said, “Keep your eye on the prophet, he can’t lead you astray, the Lord won’t let him.”  (Wink, wink.)

If the Church admits that Brigham was the real culprit in polygamy (misunderstanding Joseph’s doctrine of sealings completely), and in denying Blacks the priesthood and in Blood Atonement — the teaching of lawful killing to help save the sinner, i.e. a mixed race couple, then it admits that everything post Joseph is unreliable at best and must be seen as condemned by the Lord rather than condoned.

And hence the dilemma.  Good men generally, who find themselves at the helm of a massive corporate organization, without a Joseph-like connection to heaven.  They believe it is the Kingdom of God on Earth as did I for 40+ years.

I love them. I am sad for them.  Because they rely upon research rather than revelation.  And because they simply cannot consider a more beautiful and truthful narrative that restores and preserves the restoration itself, because it very may well undo the Church.  It certainly would undo the confidence many have in the Brethren, which as Denver has noted is the last doctrine left of the LDS Church.  We hear it over and over in Conference:  “Stay on the Ol’ Ship Zion and look to the Brethren, who can’t lead you astray.”

In my view, Denver Snuffer is the most reliable witness of our day.

Many of my questions, many of my concerns, many of my issues regarding deep and important questions about the gospel and eternity HAVE been answered by this obscure and interesting man the Church sees as a threat.  Denver ironically has kept me in the gospel when I might have otherwise been tempted to throw the baby out with the bathwater as so many have when I discovered harsh truths about the Church.  Truths the Church seemed to deliberately keep from me.

I hope the Church will come to see Snuffer as a friend to Mormonism.  IF Snuffer has seen the Lord and IF Snuffer has been called to some work in these the Last Days (another dangerous bubble apparently) THEN perhaps we should at least read and consider what he is saying and ask God if it is from Him or not.

When I read his books, it makes me want to be a better person, turns me to scripture and makes me want to come unto Christ. If the Church determines that is “dangerous” then I am guilty as charged. Guilty of wanting to repent, be redeemed, and to have no more disposition to do evil.

God damn me I suppose, but for now, I’m inspired to hold fast to the gospel, in large part because Denver Snuffer helped me not throw away the restoration along with my many concerns I have with the Church.  This is why I see him as unique.  One the Church should see as a friend, if in fact they care about people not leaving the Gospel.